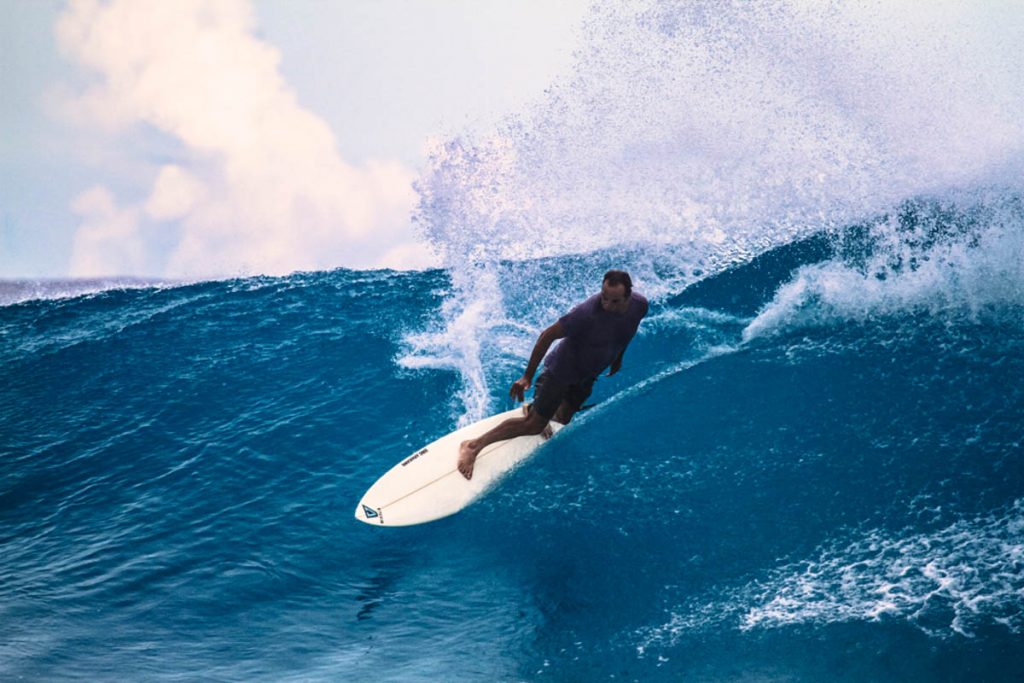 The surf industry is full of stories, and behind them all are remarkable people; personalities and characters that have stirred with vision, taken hold of destiny and either pioneered or altered the course of the industry for good.

Paul Naude has done a bit of both.

A self confessed lover of surfboards (his collection is up to a few hundred today, with a particular fetish for older wooden boards), spurred on by his early days of surfboard building under the scrutinizing eye of Mike Larmont in Durban, South Africa. Paul moved into the apparel side of the business in the early 80’s, heading up the Gotcha brand before moving to California 10 years later.

Based out of Laguna Beach in Orange County, Naude quickly gained reputation as a respected businessman in the industry’s biggest playing field as the head of the America’s for GSM Operations (Billabong Group) With a leadership style that was firm, fair and loyal (almost to a fault), he successfully grew the Billabong business in the states amidst the pressures and pitfalls of the publically listed company he was a board member of.

Naude has the memory of an African elephant, and he holds loyalty above most human traits. Jordy Smith will recall the time when a handshake deal was done on a contract renewal with Paul and Billabong (after Jordy had ridden for the brand since a pre-teen), only to be switched out for a better deal with O’Neill shortly after. Naude was livid. A deal was a deal in his mind, and it’s something he has never forgotten. He was raised on old school values, and it served him well throughout most of his career.

Paul reflects, “The Jordy saga was a long time ago. He was still just under age at the time but together with his adult family members agreed to and shook hands on a new lucrative contract.

“Following a few months of unusual communication or lack thereof from their side, we came to a legal resolution and went our separate ways. It was disappointing at the time but you move on and chalk these incidents up to experience. I remember his father saying at the initial meeting that Jordy wanted to beat Kelly Slaters record of 7 world titles (at that time). He’s put in the time; he’s currently surfing really well and probably deserves one by now”.

In 2008 when the proverbial crap had hit the GFC fan, the GSM Group found itself in financial trouble. The well documented few years saw multiple bids by private equity firms being entertained by the board. It was a protracted period of painful rounds of due diligence conducted by ‘the suits’ under the then leadership of CEO Launa Inman.

Paul had seen the potential future path of the business, and he didn’t like what he saw, so he decided to mount his own bid for the business (with his own private equity backing). The plan was to buy the Billabong brand back, take it private again and get it back to the values and principles it was built off. Take the pressure of the public company off the business, let it recover and breathe a little. While the board was considering his proposal, Naude stepped down from the day-to-day running of the American business and after a frustrating and drawn out courtship lasting 8 months; Paul and his syndicate withdrew from any further engagement with the board, and he walked away for good.

You can’t stage a coup d’état that doesn’t come off and then come back”!

The entire industry was watching closely.

In many ways it was at a precipice with Billabong teetering and Quiksilver going through one of its many identity crisis’s. The one thing that Naude had on his side, despite forfeiting his long time leadership role was, loyalty. Loyalty that came from a large percentage of retailers, particularly in the Orange County region, and also from suppliers and former staff members. The message back to Naude, even through his bid for Billabong, was ‘we will support you, whichever way this goes’.

The failed bid left Paul in a position; look for another role in the industry he had helped create and grow, or go out on his own and put into place some of the vision he had already masterminded in his bid. Naude indeed went out on his own – starting a brand new business in Stokehouse Unlimited, the holding company that now houses 3 successful global brands in Vissla, Amuse Society and D’Blanc Eyewear.

The start up business came at a time during 2013 where a thirst for new was evident in the stagnating surf industry. Out of this era came a number of start-ups including Vissla, Banks, Depactus, Rourke and Salty Crew. 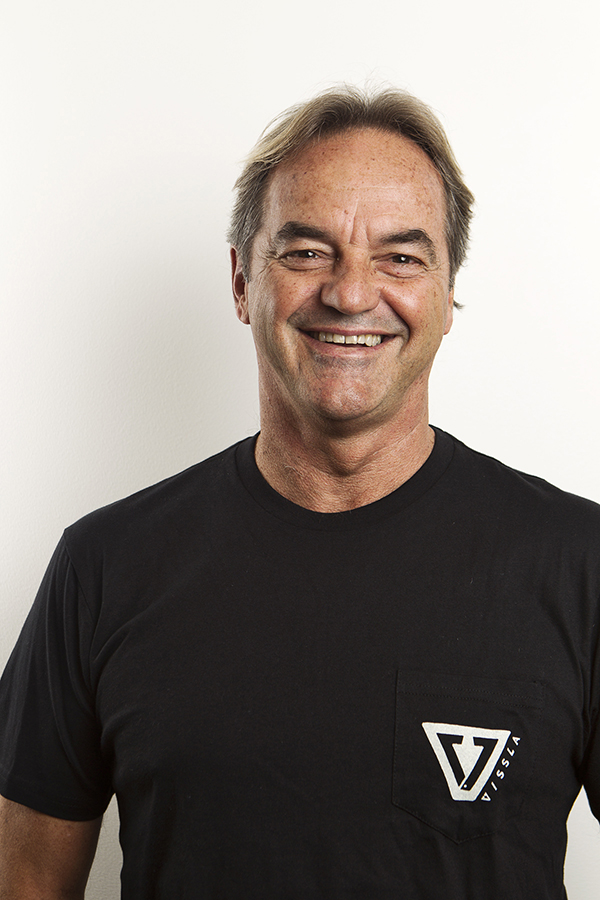 “Billabong was a large complex business at the time I put in a bid”.

“The first step would have been to take it private which in itself would have been a major step in the right direction. The vision for Stokehouse and its brands was to take a completely new, fresh approach. We were blessed with a blank canvas in a rapidly changing market where the new consumer was yearning for newness”.

Adding, “The surf consumer revolution is driving an industry evolution and we’re excited and stoked to be a part of that. We have realistic business expectations, were close to our consumers and customers, and we’re nimble and can adapt quickly as the market evolves. And we love surfing”!

So where will the industry been in 5 years?

It’s changed so much in three years so the next five is going to be interesting to say the least. I’m really optimistic that the core surf market and its participatory consumer base will be healthy and vibrant. I’m excited about the opportunity for brick and mortar surf retail.

“I don’t think it’s all going to go to ecommerce”.

Digital selling will be there for sure but I don’t think it will dominate sales and I feel that retailers will have the opportunity to participate in that channel”.

“I don’t believe that the scale the industry rose to in the first few years of the new millennium is coming back”.

But the opportunity to build around a realistically sized, specialized platform is here”.

“Let’s face it; surfing itself has never been more exciting. So the real foundation is there”.

That excitement may also have something to do with the ground breaking #test event at Kelly’s Surf ranch and the inclusion of surfing in the Olympics.

“They (wave pools) will be a part of surfing’s future – both competitive and recreational but I don’t think they will dominate the sport. It’s more prescribed and therefore arguably limiting. There will be some great performances in artificial waves but I don’t see it replacing the real thing. A big part of surfing, the essence really, is the natural environment and the unpredictability of the ocean. How could you replace events at iconic places like Bells, Cloudbreak, Teahupoo, Pipe etc.”?

“As long as the surf is decent, the Olympics will be great for surfing. Again, not the be all and end all but incorporating National pride and great surfing performances among the broader spectrum of the worlds very best athletes every four years will be a great addition to competitive surfing. In my opinion, every top competitive surfer would covet the chance to compete for Olympic Gold”.

With the winds of change and uncertainty wafting around the industry again, with the impending merger between Billabong and Quiksilver, Rip Curl and Volcom up for sale and Surfstitch emerging from the ashes – and the continual growth of the 2013 start ups – Paul Naude’s timing may prove providential and he stands as a man who might be pioneering the surf industry all over again.

This article, written by Brad Bricknell originally appeared in Surfing Life Magazine. The Surfers Issue 339 is on sale now in newsagents around the country. Or you can subscribe to Surfing Life or buy the mag here. 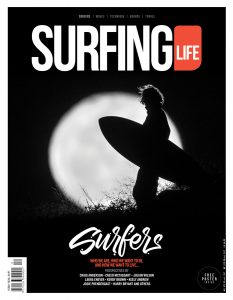